Ed Margarson, Sleigh Appeal Organiser for the past several years, once again wished to thank all the residents and members of North Walsham who gave so generously. He added “the Roundtable and I continue to be overwhelmed at the level of support given to our annual Sleigh Appeal. It was great to see so many children enjoy seeing Santa and his sleigh visit many roads across the town during December”.

Once again, a live tracker was hooked up to the Sleigh allowing children and their families to know when Santa was close!

Matthew Smith, Trustee of North Walsham Play wished to thank North Walsham Round Table for deciding support them again in 2019. He added “we have really enjoyed helping Santa and his elves once again as they visit many parts of North Walsham. We will put the donation to very good use with regards to reaching our £185,000 fundraising target for a new Skate Park”

Find out more information about North Walsham Round Table here: https://northwalsham.roundtable.co.uk/ or visit their facebook page via www.facebook.com/NWRT331 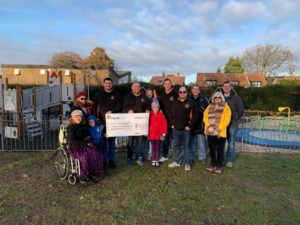 North Walsham Play received a major boost to its fundraising efforts following a pre-Christmas gift from George Pegg. A cheque was handed over to Matthew Smith MBE, totaling £608.10, which was raised at the Christmas Makers Market organized by George and his family.

Presenting the cheque, George Pegg was very pleased with the figure raised from the event which took place on Saturday 7th December 2019 at North Walsham Community Centre. He added “I really do hope the money raised will help with the funds needed for the Skate park”.

George, who has autism, has always wanted to run his own catering business, so the maker markets allow George to organise, manage and run his hugely successful pop-up Café. Originally the idea of a close family friend, Helen Richardson, George’s Cafes are very well known within and around North Walsham for providing delicious homemade cakes, bakes and treats.

Receiving the cheque, Matthew Smith wished to thank all who helped organise the event along with all those that came and gave their support. He added “this is a great boost to our fundraising efforts to help bring about a new state of the art skate park within the town”

Make sure you follow George on Facebook via @cafecuppacraft to keep up to date on all the events planned for 2020 and beyond.

On Saturday 16th November 2019, the St Benets Hall in North Walsham hosted the second annual Christmas Fayre. A hall full of stalls greeted the many hundreds of customers who attended. Along with the many bargains to be had, there were Hot and Cold  Refreshments, Children’s Activities as well as Santa in his Grotto. The event raised £672.25 for North Walsham Play. Thank you to everyone who supported this event.